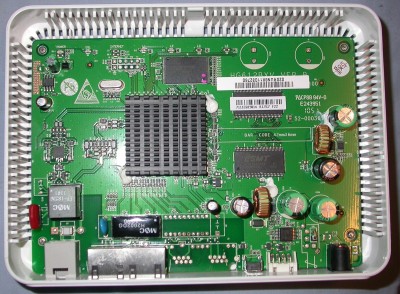 A quick shot of the inside of the BT Openreach Infinity VDSL2+ modem/router/bridge, which comes in a box labeled Huawei Echolife HG612. See Huawei’s page for the HG612 (link now broken). However, it is clear we have a modified stripped down version of the device, as there are no wireless features visible either internally or externally. This also means we have no access to any configuration pages it has (as yet).

A quick note on opening this thing: there are 4 Philips/Pozidrive/crosshead screws under the outer ends of the rubber feet, you don’t actually need to pull the feet fully off to get to the screws. There’s also a really annoying clip in the middle of the ‘front’ (opposite the connectors) of the box. This is easily dealt with by opening up the back edge slightly, and sliding in a long screwdriver to give a gentle push out on the front. The top then simply lifts off. Re-assembly is easy, it simply clicks in place.

There is but one other problem with this box: namely, it regularly ends up disconnecting from the broadband line, intermittently at first, then more and more often until it can’t keep a connection at all. This happens our about 2 months for me, keeping the modem flat, sitting on it’s feet on a shelf.

The problem with this box is, unsurprisingly given how few vents are on it, heat. Take out the 4 screws from under the outer ends of the feet, and whack a big fan onto it, and it sits, even after cooking itself stupid for 2 months, happy as anything, cool as a cucumber. There are reports that if you wall mount this box in the vertical position then the vents actually work! However, I have not tried this, so cannot say. It may be enough to stop a new box cooking itself, but not to fix an already problematic box.

I’m sure that in time I will be trialling a new modem in the upright wall mount position, and if there’s still no joy I will be having a go at modding that one so an external power supply is not needed, even mounting the fan within the box, a small CPU fan should do the job after all. If you do intend to do this, it’s worth bearing in mind that offically these boxes still belong to BT Openreach, so you might not want to damage it too much.

One final picture to give hardware hackers another excuse to break into these boxes, a lovely block of headers, marked RX, NULL, VCC, GND, TX, and another row is a JTAG connection from my brief research. Hopefully this might lead to some 3rd party firmware, so we can access some stats from this and use some of it’s other features. Also interesting to note is the ‘Internet’ LED space for 2 LEDs, I assume one green and one red to indicate the state of the PPPoE connection when this box is used to handle it. BT of course uses the home hub for this, but actually you can use any PPPoE cable router or simply a computer. I personally hook mine to a m0n0wall box. 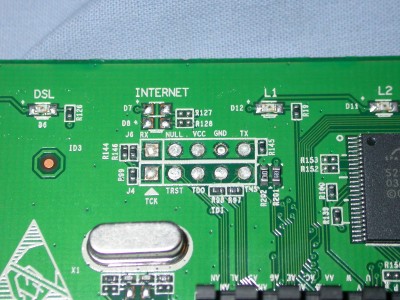 This entry was posted in bt infinity, networking. Bookmark the permalink.

This site uses Akismet to reduce spam. Learn how your comment data is processed.